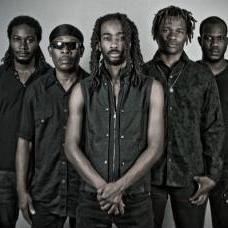 Raging Fyah is an authentic, soul-filled, roots rock reggae band, with a fresh contemporary flare, that will literally set your soul on fire! That’s what makes Raging Fyah one of hottest spreading, most captivating and powerful entertainment packages in a long awaited Reggae Renaissance!

The “Fyah” was ignited in 2006 in Kingston Jamaica, and five years later they released their debut album, “Judgement Day” recorded in the world famous Tuff Gong Studio. They gained popularity and presence locally and internationally, with songs - such as the title track “Judgement Day” and hit single “Far Away” – charting and also receiving heavy rotation on the airwaves. The “Fyah” continued to spread into 2012 & 2013 as headline acts for all the Major Reggae Festivals in Europe (returning in July 2014). With our new Album “Destiny” we are embarking on brand new territory—the USA & Canada - currently booked for Festivals in June, Aug & Sept 2014 (in California, Alberta & B.C.)

Raging Fyah is committed to changing the world, note by note, melody by melody, spreading light in areas of darkness, growing when conditions seem most bleak, demolishing obstacles without remorse… “We will keep blazing... like a RAGING FYAH”

“There's a really creative new wave emerging in Jamaica right now there's the band called Raging Fyah that has the essence of classic reggae, but it doesn't sound like old music from 50-odd years ago” (Chris Blackwell in Rolling Stone Magazine)