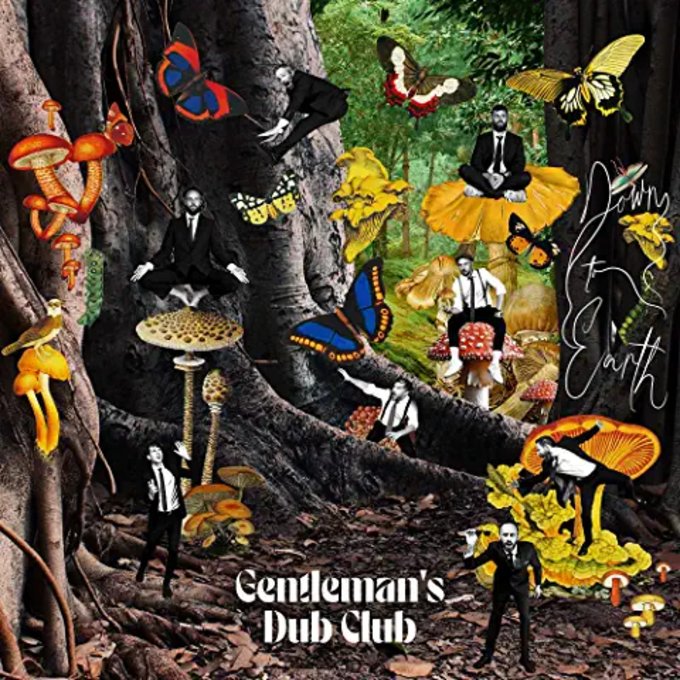 After finding themselves ‘Lost In Space’ in early 2019, Gentleman’s Dub Club are continuing their voyage through some of the freshest sunshine sounds, and now is the time to unveil a new chapter. Their brand-new studio album ‘Down To Earth’ is out now and it’s gone straight to #1 in the UK iTunes Reggae chart.

To celebrate the release, the Gents will be hosting a live streaming party and Q&A tonight on their YouTube channel at 6pm UK Time.

After their single ‘Honey’ featuring Hollie Cook hit the sweet spot from the get-go with plays from Steve Lamacq, David Rodigan, Brooklyn Vegan support, and a mammoth playlisting at FIP (French National Radio), the following singles ‘Night Shift’ feat Gardna and title track ‘Down To Earth’ also resulted in press support from Bonafide, Skiddle and more. Not to mention a B-side of ‘Down To Earth’ includes Josh of The Skints on vocals.

Exploring the diverse and expressive world of reggae over the last few years with their ‘Pound For Pound’ collaboration with The Nextmen, plus their cover of Bill Withers’ ‘Use Me’ featuring Kiko Bun and their mission through time, space and bass in album #7, the Gents are now combining organic reggae roots with their own fresh approach to song-writing and new heights of production. Continuing their strong partnership with the mighty Easy Star Records and having a helping hand from Gardna and Hollie Cook is only ever going to have one outcome, and they would like to invite every single one of you to join them.

On their new album, the Gents added:

“The writing of ‘Down To Earth’ coincided with a time not only of international existential crisis, but also of our own personal realisation that the future for live music – the main platform and ultimately life force of GDC - was up in the air.  We decided that ‘Down To Earth’ should be a snapshot of that point in time, where everyone was able (for better or worse) to reflect on their role in the world around them and consider the past, present and future inside the vacuum of lockdown. While it’s a deeply personal album, the themes and sentiments on the album are universal, and point towards a future that values love and understanding over conflict and hate.”
The first single ‘Castle In The Sky’ kicked the campaign off, followed by an album announcement in January: 10 tracks of inexplicably smooth dub, reggae, ska, jazz and electronica. ‘Down To Earth’ is a seriously impressive journey through different eras of the genres that they hold dear. No stone is left unturned as the origins of dub are revisited, reinvented and reinstated in this production masterclass.

Armed with 7 studio albums and multiple single releases, Gentleman’s Dub Club haven’t taken their foot off the gas since starting out in 2006. Their relentless touring and onslaught of music has resulted in them playing to tens of thousands of people at a time. Without a doubt festival favorites, their explosive live shows are a gnarly experience of controlled chaos that have taken them from headlining tours to supporting reggae giants UB40 across UK arenas.

There’s a reason why every show receives a sell-out performance, and why they’ve played such a huge part in the modern reggae revolution, it’s because they love what they do to the moon and back ‘Down To Earth’ – who wants to get involved?