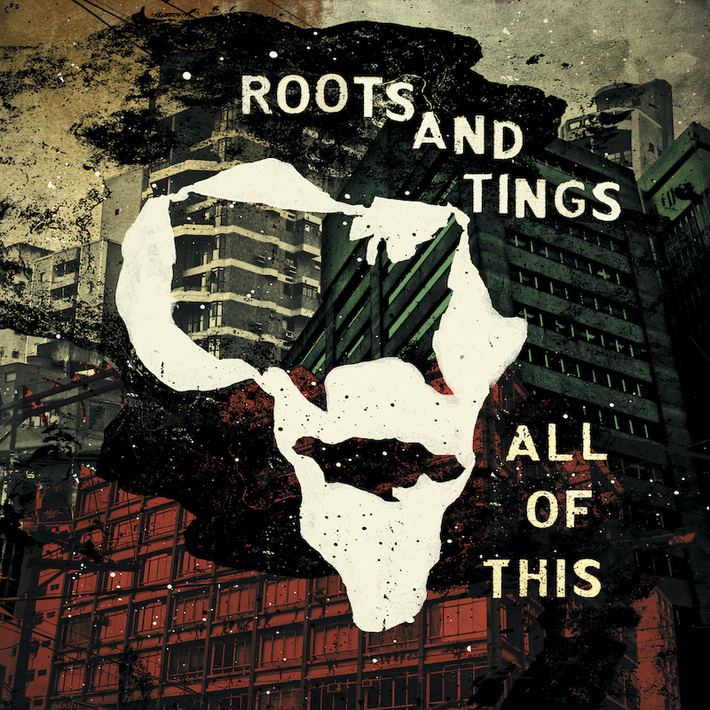 Quannum and Solesides co-founder, and Grammy nominated MC, Lateef the Truth Speaker has joined forces with acclaimed Bay Area DJ and producer Jah Yzer and the multi-talented musician and reggae artist Winstrong. Together they have combined elements of dancehall, reggae, and hop-hop into their own brand of Revolutionary Culture Music with a Bay Area bend on their newest project Roots & Tings. The new music draws deeply and respectfully from the history of the genres while pushing a new vibe to create powerful and provocative tracks. Winstrong states, "Our mission described best, would be learning and transmitting knowledge to succeeding generations. Roots and Tings is a community of curious souls with a generous goal to engage with each other thru the stories told." The new album, All of This, is out now and is available on both vinyl 45’s and digitally, everywhere you can stream.

Born and raised in Oakland, CA by politically active and former Black Panther parents, Lateef the Truth Speaker is most well-known for his role in the Bay Area rap collective Quannum Projects alongside DJ Shadow, The Gift of Gab, Chief Xcel and Lyrics Born. Together they helped usher in the underground era of hip-hop in the 90’s. His 20+ year career in the industry is highlighted with a Grammy nomination for his collaboration with Fat Boy Slim on “Wonderful Night.”

Lateef is a prolific solo artist, who’s writing is woke and witty. He joined up with DJ and Producer Jah Yzer who is well known in the Bay Area for dropping big reggae riddims on the soundsystem Jah Warrior Shelter Hi-Fi. The talented DJ first gained acclaim as a radio personality for Miami’s 94.1 Beach Radio, and moved to the Bay Area where he established himself as a high profile DJ and has collaborated with the likes of J Boog, Too Short, Sister Nancy, Fiji and more. Winstrong first hit the scene alongside the legendary Don Carlos as an Urban Dancehall artists. His voice is soulful and boldly couples strong melodies with conscious messages. He is able to elegantly combine world music, hip-hop with R&B and Soul, alongside his foundation as a roots reggae and dancehall vocalist. His talent is vast and creative, and has much to offer to the Roots & Tings project.

Until embarking on the Roots & Tings project, the Bay Area based artists, Lateef, Jah Yzer and Winstrong have known each other separately for more than 10 years. Coming together for this project a collaboration was immediately born as they clicked effortlessly over a relatively unstructured creative process. Lateef comments, “Roots & Tings came about as an organic evolution of an idea to do remixes for a mixtape, that led to more conversations and original ideas.” He continues, “The name Roots & Tings came from the idea that the music should reflect the source, the soul- or the ‘Root’- of the music we were making, and all of the ways that we added on to those original ideas with new ideas and interpretations would be the ‘Tings’.”

The new record was recorded primarily at Zoo Labs in Oakland, CA, and by the first session they had 9 songs laid down. Having now worked together for 2 years on this project and with almost 50 songs recorded, the trio are excited that they are finally putting forth their new project.

Roots & Tings LP All of This is 13 tracks deep, will be available digitally and on vinyl limited edition 45’s and with killer visual produced and created by Ben Stokes (DJ Shadow).  The new project is full of epic island tinged hits including the fresh “Highest Grade,” and the standout dubby lead single,  “Class War” which was released with “Oh” on the B-side. HipHopDX commented, “Bay Area Hip Hop staple Lateef The Truthspeaker has resurfaced with a new single called “Class War” featuring his Quannum Recordings brethren Gift of Gab and Lyrics Born. The track is taken from his forthcoming Roots & Tings album, which intends to showcase the existing parallels between reggae and Hip Hop.” Both tracks are stellar with cutting bars as Lateef the Truth Speaker and featured artists Lyrics Born and Gift of Gab spit about the 1% on “Class War”, Lateef says, “They want more. The rich get richer. The rest of us are poor. It’s a Class War.” On the B-side featured artist Gift of Gab joins Lateef on “Oh,” Lateef recalls, “We all know someone like the person described in the song.  If you don’t, you might be the person in the song.” Hitting the theme of the social economic injustices, “Class War” has limited edition original artwork by incarcerated artist Raul Fernandez available with special, limited vinyl 45’s.

Another advance track out now, is the soulful love song with deep chilled dancehall riddims, “All Of This” ft. Vursatyl (of Lifesavas). For Lateef the song, “ ‘All of This’ is a modern love story. Passionate, honest, kinda messy, and very, very true. Hopefully people hear some of their own stories in there somewhere.” The new track was produced by Racayan – his debut track. The new album is stacked with features with some of the best rappers in the game including, Gift of Gab (Blackalicious), and Lyrics Born (Latyrx) to name a few. Additionally, Roots and Tings will be releasing remixes of Lateef’s hit “Lady Don’t Tek No” and Blackalicious’ “Alpha Omega.”

Reflecting back on the new project Lateef comments, “It is an ode to the love affair between Hip-Hop and Reggae music since the inception of hip hop. The music is a combination of all the different iterations through the years, of both genres.” Agreeing Winstrong adds, “Roots and Tings. Music to guide our perception.”

For the past year, the trio has been touring Roots & Tings, as well as, new music and fan favorites, including a memorable run with Blackalicious! Follow the group on socials and check out their new site: www.rootsandtingsofficial.com for exclusive merch, vinyl, t-shirts and more!