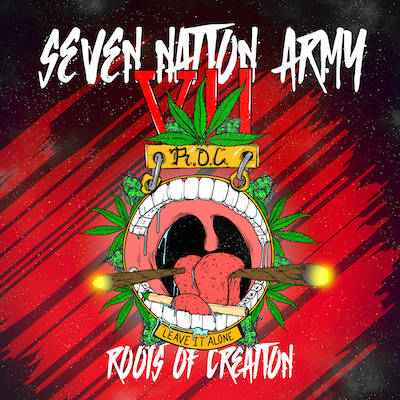 The new music comes ahead of their fan funded new “Dub Free or Die Vol. 1” due out this summer! For the new singles, Roots of creation invited the esteemed Hayley Jane to be featured on their cover for White Stripes “Seven Nation Army.” Reflecting back on the songs, Andrew (production/sax/vocals) recalls, “I wanted it to sound dark and even in the quietest moments still carry an intensity that moves the listener. Making Hayley Jane’s and Brett Wilson’s vocals sit perfect and still be playful was a fruitful challenge.” Brett Wilson, bandleader, on vocals and guitar, added, “The 3rd verse when both main vocalists meld together along with the end peaking orgasmic wall of guitars are my favorite parts.” The new song is the perfect blend of Roots of Creation’s iconic sounds, melding into what Tattoo.com recently called “bewitching layers of reggae-rock, injecting an iconic song with lip-smacking flavors.”

Additionally, the band released a dubbed cover of the song aptly named “7 Nation Army Dub.” The new song showcases their technical prowess and jam band roots. “My goal in producing the track was to mix Heavy Dub Reggae with the raw authentic Rock’n’roll vibe that the original song displays and put them together in a cohesive way. I am influenced by the Dub sounds of the 60’s, Lee Scratch Perry / Black Ark Studios, & Mad Professor, however this track was Dubbed out with a modern approach,” comments Andrew.

This summer Roots of Creation is set to return full throttle with new shows and festival dates! Kicking off the run, is their performance for the second edition of the Reggae in the Rockies festival June 5 & 6. The festival features some of the best Jam and Cali Reggae Rock bands in the scene set to perform with Brett Wilson as a special jamming artist at large! Additionally, they will be at Pittsburgh's Reggae and Relief 2021 in August performing in support of Jason Mraz, The Wailers,  and Michael of Rusted Root. The band is beyond excited to get back on the road and in front of their fans after a year of virtual shows and lots of social media connections. Audiences can expect to hear Roots of Creation perform fan favorites, classics off the Billboard charting Grateful Dub: A Reggae-infused Tribute to the Grateful Dub, as well as choice selections off their upcoming new album Dub Free or Die!

This year Roots of Creation has released a slew of outstanding singles including “Mammoth,” “Arabia” Ft. Mihali (of Twiddle), and “Light it Up” ft. Mighty Mystic. So far the new songs have garnered critical accolades from Relix, Live for Live Music, Reggaeville, Celebstoner, Top Shelf Music and more. All the new music will be on the forthcoming album Dub Free or Die Vol. 1 which is set to be released later this summer. The new album will be available on all digital platforms, CD, and Vinyl shortly thereafter, as vinyl plant timelines seem to shift week to week.