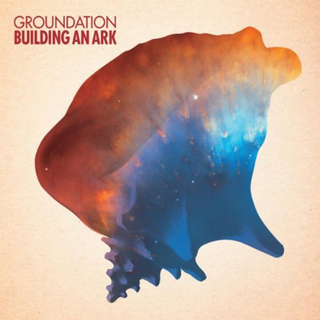 California reggae band Groundation is a reggae/jazz fusion band influenced by many other genres. One thing I can say for sure is that they are consistent in their regard to quality and growth. They are diligent about evolving their sound, they stay true to conscious roots reggae music, and their musicianship is always on point. Do not, however, confuse this consistency with a lack of diversity. Although fans can always recognize Groundation’s rich sound, one can never say one album sounds like the next. Their seventh and latest studio album release Building an Ark is a perfect example of this diversity and consistent growth.

The album, much like Groundation’s collection as whole, progresses like a story. The title track “Building an Ark” starts off as a ballad-like acoustic with Harrison Stafford getting as close as you may ever hear him get to “crooning” a love song in a traditional sense. The lyrics, of course, have a myriad of meanings, so those of you not wanting a ballad from this roots man will be satisfied.

The story continues with chapters about judgment, “Flames burn hot and red, a fierce fire for them” (Merry-go-round), and corruption, “Robert Mugabe led the people dem astray/Bruce you know you lead the people dem astray” (Payaka Way). It arcs with “The Dreamer,” a song with a clear country influence (Willie Nelson in particular). Harrison Stafford (the dreamer) sings of himself “As a cowboy I come riding my golden chariot” and emphasizes the album’s hopeful tone, “So plant your seed and teach your children of all unseen/for we have not lost sight of the dream.”

In true roots style, the album has a few biblical references. Besides “Building an Ark,” there’s “Daniel,” a reference from the book of Daniel in the bible. In this funky tune, Harrison Stafford recounts, “Just like Daniel heading out of the lion’s den/When all of his bredrin, they all left him for dead.” But also true to roots reggae, there are songs that are prophetic, and a commentary of the times. “Payaka Way,” speaks directly to the greed occurring around the globe and could be an anthem for occupiers, “Recession you can feel is all about money/So much pressure you can’t deal it is all about money/Oppression of the poor it is all about money/The rich is getting richer still they want more Money.”

Any Groundation fan will tell you that nothing compares to a live performance, primarily because of the lively solos. Building an Ark, the album, comes close to being a live album. Rife with solos, the members of the band stretch their musical chops, giving the listener a taste of the scope of their skills. “Daniel” even has a soulful guest guitar solo by Lukas Nelson, son of Willie Nelson.

As much as the album name contains a tapestry of meanings; “Ark” referring to Noah’s Ark in Genesis, the Ark of the Covenant (the sacred chest which holds the Ten Commandments), and ark as a place of protection or refuge, so does the music. Each track is intricately built with levels of all seven instruments and music from more exotic instruments like the conk shell on “Humility.”  Although Groundation is loyal to unadulterated roots reggae, their music is not your father’s reggae. With the characteristic reggae “riddim” as the base, Groundation cooks up a thick musical stew with the lyrics as the “protein.”  Staples are then added to this musical banquet in the form of horns, bass, keyboards, drums, and timbales to create hearty comfort food that fills the belly of the soul. Harrison Stafford, Kim Pommell, and Kerry Ann Morgan add flavorful seasonings with the broad range of their voices to finish off this rich musical feast. The album closes with another more melancholy acoustic “Sun Light Reflection” which laments, “And what if our history, Is but the endless struggle of wolves and sheep?” signaling Groundation is not done telling this story.